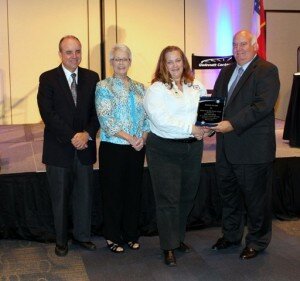 Riki DeLamar, a veteran Paramedic with National EMS for three decades, has been recognized by the Atlanta Region III EMS Council with the 2015 Dennis Lockridge EMS Pioneer Award for her unselfish contributions to the development of Georgia’s Emergency Medical Service System.

The annual award, presented during the Region III Banquet ceremonies, recognizes Riki for her achievements in the various roles and positions she has served since joining National EMS in 1984. In her current role as Director of Continuous Quality Improvement, Riki reviews all of our Medical Records and EMS Pre-Hospital Care Reports of 911 calls to make sure that time-dependent procedures performed by EMS personnel comply with evidence-based best practices.

Riki has served as a representative on the Region III EMS CQI Committee for several years and has taken a leadership role in providing input into the CARES (Cardiac Arrest Registry to Enhance Survival) Registry for services in the metro-Atlanta service area. Although time-consuming, this attention to detail helps to ultimately improve patient care through studies of aggregate data from multiple EMS agencies.

Benny Atkins, National EMS Chief Operating Officer, describes Riki as being an outstanding leader who has the respect of all her peers. “Riki is not only involved with EMS operations, but is committed to quality, which has been very beneficial to National EMS maintaining accreditation for over twenty years,” Atkins said.

Last year, Riki was honored with the prestigious 2014 EMS Public Safety Award presented by the Georgia Chapter of Veterans of Foreign War for her service and outstanding commitment during her three decades of service to EMS.

The Annual Dennis Lockridge EMS Pioneer Award was presented during the Atlanta Region EMS Banquet held at Gwinnett Medical Center in Duluth on Saturday, May 16. Over 200 EMS personnel and their guests attended the annual banquet, which honors all EMS Personnel in the Atlanta area and recognizes them for their achievements.