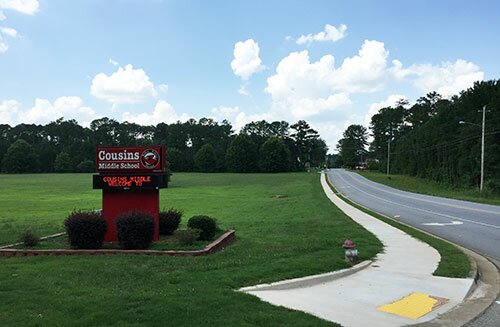 Covington, GA – A sidewalk stretching more than half a mile and connecting citizens living in the northwest quadrant of Covington with the rest of the city is now complete. The project ran from Geiger Street to Moore Street in Oxford.

The section of sidewalk will also link the western part of Oxford along Geiger Street to the proposed pedestrian Interstate-20 bridge and into the City. The sidewalk also provides a safe means of pedestrian transportation for the children attending Cousins Middle School, located in the middle of the project.

“There were some inadequate drainage areas that consisted of an open ditch and minor flooding would occur after heavy rain,” said city engineer Tres Thomas. “We took this opportunity to correct those issues and improved the open ditch to 18 inch drain pipe and catch basins.”

Residents along Carlton Trail cited safety as a primary reason the sidewalk was needed. Longtime resident George Jefferson moved to his home on Carlton Trail in 1978 and watched Cousins Middle School being constructed in the 1980s. He has seen first-hand the need for the improvements.

“Safety for the kids attending Cousins Middle School was the primary reason the sidewalk was needed,” Jefferson said. “But aside from that, it is nice to see people old and young use it for exercise or just as a way to get from point A to point B.

“Adding curbing to some yards and fixing our drainage problems were bonuses. This was literally an answer to our prayers.”

Councilman Keith Dalton agreed with Jefferson’s assessment of the necessity of the sidewalk.

“It is nice to see this project come to fruition because I know it has been needed for a long time” Dalton said. “There are a lot of kids that don’t ride the bus and may not have parents that are able to take them to school so they have to walk. This sidewalk creates a safe way to get these kids to school.”

City Manager Leigh Anne Knight said the project came in on time and under budget.

“At the time this area was developed sidewalks weren’t a requirement and with a large middle school there now, a sidewalk was necessary,” said Covington City Manager, Leigh Anne Knight. “We had to start from scratch, but the project was completed on time and under budget.”