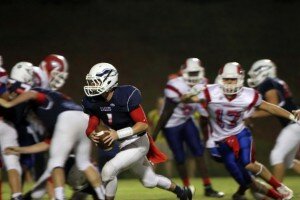 The Eagles were powered by Daniel Hardeman’s 306 total yards and four touchdowns. Defensively Kobi Fambrough led the Eagles with eleven tackles. It was a hard-fought contest, with both sides trading kickoff returns for touchdowns. Daniel Hardeman returned a Sherwood kickoff for a 95-yard touchdown in the fourth quarter. Ross Mahan threw for over 120 yards on an 8/15 night, while adding 62 yards rushing.  Blake Rhineheart was a major contributor filling in backup duties for kicker and quarterback.

Coach Tim Smith of YACS is in his first year as head coach of the Eagles. YACS participates in the Georgia Independent Christian Athletics Association.

Friday, September 18th, the YACS varsity football team will face Cornerstone at 7:30 at YACS on their Eagle Field.

No Responses to “YACS Varsity Football Victory Over Sherwood Academy”