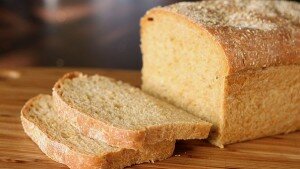 It is difficult to bear.

The sight of a fresh loaf of bread on the counter. The knowledge that its perfect crust, its delicate interior is yours for the taking, but soon, only soon. For in only a day, two days, three days if you’re lucky, that marvelous bready goodness will be rigid and stiff as stone. It’s a tragedy we all know, and the smaller the family size, the more bread we see go to waste time after time. But what can we do? We dare not turn to the supermarket shelves of chemically stabilized bread-like substances, softened with corn syrup and dough conditioners. And there’s only so much bread crumbs you can amass out of the leftovers before your cupboards overflow. No, we must learn to defeat staling.

And to defeat staling, we must first understand it. You might think, as I was raised to believe, that stale bread is simply dry bread, that as moisture leaves the loaf and dissipates into the air, the breadflesh stiffens and dessicates until it becomes tough and leathery. In truth, that’s only half the story and not the actual definition of staling.

Starch, whether it’s the fluff in your potato, the toothiness of your rice, or the chewy snap to your cookie, is composed of two complex sugars: amylose and amylopectin. When plied in moisture and heated, these polysaccharides are free to roam, flopping around and lying where they land, finding form lacing themselves into the gluten matrix and puffing up by trapping the carbon dioxide generated by the leavening agents. But once the heat is gone, amylose, a long, straight sugar, starts to realign itself. The more amylose gathers, the more it crystallizes until your bread becomes, well, as hard as a rock. This process (known as retrodegradation for when you talk about it at fancy parties) is the fundamental process of staling. It’s important to note that this crystallizing process happens fastest in cool temperatures, which means storing your bread in the fridge is the fastest route to Stalesville.

But while the fridge isn’t an option, the freezer is. If crystals are the problem, maybe crystals can be the solution as well. In the freezer, amylose isn’t the only thing itching to get organized – water’s making its own crystals in tandem, and those little three-atom ditties are going to set up far quicker than the whopping chains of bonded glucose that compose amylose molecules. And once that smaller, finer crystal matrix is established, it prevents the larger polysaccharides from getting together and doing their own thing. And that means a big nope to staling.

Bringing it back means beating back the symptoms, too, and it’s important to note that retrodegradation actually reverses itself at around 140F. This means stale bread (as well as rock-hard leftover rice and oddly-textured cold potatoes) in a microwave or toaster comes right back to life once it crosses that thermal line, but once it cools down, all that extra moisture loss is going to make it harder than ever.

And now you know. So let’s go over what this means for you and that loaf of bread you just picked up.

1. Cut it down. If you’re going to try to cut slices off a frozen loaf, you’re going to wind up short at least one thumb. Break the bread down to your desired end format before storing.

2. Wrap it tight. Just because you just learned about the starch crystallization side of staling doesn’t mean dehydrating isn’t something we want to prevent! Plastic wrap, a zip-top bag with the air drained from it, or my personal favorite, a wrap in foil will all keep moisture where it is and funky flavors out.

3. Freeze it solid. If you’re not using that bread in the next 24 hours, into the freezer it goes. That bread is staling as we speak, so the sooner you stall that reaction, the better.

So there you have it, guys. I hope understanding a little more about what’s going on inside your bread can help you feel more confident about bringing home that baguette or boule. After all, information and proper care are the cornerstones of any good relationship. Cheers in the meantime, and eat well.

Raoul Caes eats, cooks, and thinks about food a little too often for his own good. He has six completely different recipes for fried chicken, never turns down a taco, and once spent a whole day just reading articles about eggs.

No Responses to “On Staling.”