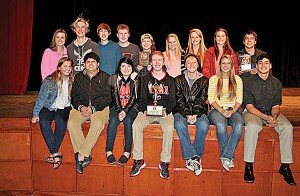 The play received first place rankings from all three judges, giving them the title by four ranking points. The next closest play was the first runner-up, which was Neil Simon’s Plaza Suite, Act Three performed by Crisp Academy in Cordele. The Piedmont team was nine points ahead of the second runner-up, The Romancers performed by Wildwood Christian School from Atlanta. There were eight total plays competing at the state competition.

The judges further recognized Piedmont’s work by giving an honorable mention performance award to the entire ensemble of 13 actors who all stay on stage for a large portion of the production. They praised the production for its high energy from set-up to strike, and they loved how every character was involved in every aspect of the play.

The play, titled “The End of Civilization As We Know It,” was written by Mark Kaufmann, and it features the story of students on the morning of their dreaded history final. The students are, to say the least, stressed, but have a glimmer of hope when they receive word that the teacher is absent. When their teacher Mr. Mangles arrives, the exam he gives is not what they expect. The play is a short comedy with an important lesson.

Playing the lead role of Mr. Mangles is sophomore Will Tillman who was recognized for his outstanding performance at the region competition.  Filling out the cast are seniors Gabe Courtman as “Joe Rubiac,” Cameron Hallman as “Cathy McCann,” Andrew Mitchell as “Ted Hogan,” and Chase Olson as “Ben Kowalik.”  The show also featured junior Morgan Leach as “Lily Trent,” sophomore Nick Maynard as “Leezel Crane,” sophomore Danny Ramsdell as “Justin Garfield.”

The show was directed by Bobbi Sauls, who was also praised by the judges for her work with these students. This represents Ms. Sauls third state one-act title and eleventh state title as a drama, debate, and spring literary coach.

The cast and crew were supported by a number of Piedmont students, faculty, and parents who made the long journey to Albany to support the drama group.The school last one back-to-back state one-act play titles in 2010 and 2011, the same years that the Piedmont football team also won back-to-back titles.

Piedmont Academy was founded in 1969 by parents looking for a strong, college preparatory private school with Judeo-Christian values. Piedmont Academy’s family atmosphere and total academic experience produce well-rounded students and parental involvement in all areas of the school. Small class sizes offer individual attention so each student will receive the personal attention they deserve; teachers know your child and are able to uncover the talents that make each child unique. Piedmont seeks to build the total student by offering many opportunities for involvement. A wide variety of athletic and extracurricular activities are offered and encouraged.

Piedmont Academy has just completed a new all-purpose building with a physical education gym, weight room and locker rooms; you are Invited to tour the building on March 1st at 2:00 P.M. Piedmont will be hosting open house for prospective students at 3:00 P.M. on March 1st. Visit www.piedmontacademy.com for more information.