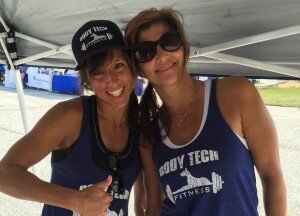 Lauren Cook, a 2007 graduate from Heritage High School, took Huntington Beach by storm in early August during the 2015 Vans U.S. Open of Surfing. In mid-July Lauren was invited to compete in the F45 Playoffs, a new functional fitness competition developed by the F45 Training franchise. With only two weeks to prepare for the event, she gladly accepted and entered to compete against other top female athletes in the nation for a first place prize worth $5,000. The playoffs lasted 9 days at Huntington Beach. For the first seven days of the competition, Lauren impressed thousands of attendees as she held a top spot in the rankings – outscoring even some NFL and NBA athletes! On the final day, Lauren competed head to head with the top female contender. After back-to-back rounds of the relentless 10 minutes full body circuit fitness test, Lauren finished a hair splitting 2nd place. However, during the competition finals, Lauren broke the F45 Training record for most cone hops recorded in a competition. With the impressive finish, people at the competition became very curious where this mystery athlete was from.

After graduating from Heritage High School in 2007, Lauren accepted a scholarship to play soccer at Samford University where she completed her undergraduate studies. As a freshman at Samford, she broke the school record for most goals scored in one season. After graduating from Samford, Lauren became a missionary and spent two years in Nakuru, Kenya. She completed her missionary work along with a masters degree this year and returned to help out at her family’s gym, Body Tech Fitness in Conyers.

Lauren has been operating and training at Body Tech since January this year. Lauren has come to love helping people reach their goals in all aspects, but especially health and fitness. She is starting a new class in September at Body Tech called “Survival of the Fittest” which is a high intensity class that incorporates a lot of body weight, boot camp, and functional fitness movements. The class was already close to filled up in its first week, and she is looking forward to offering more classes soon.