Isakson to Visit Dobbins Air Reserve Base on September 4th 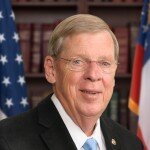 ATLANTA – U.S. Senator Johnny Isakson, R-Ga., today announced that he will conclude his two-day tour of four Georgia military bases at Dobbins Air Reserve Base in Marietta, Ga., on Friday, September, 2015. His visits include those facilities affected by the U.S. Department of Defense’s announcement on July 8, 2015, regarding changes in the total number of military personnel serving on the bases.

Isakson will be joined by U.S. Reps. Sanford Bishop, D-Ga., and Tom Graves, R-Ga., during his visit to Dobbins ARB.

The Georgia delegation’s two-day tour of military instillations across the state follows a series of Washington, D.C.-based meetings that Isakson has led with senior Pentagon officials from each of the branches of the armed services to discuss the importance of Georgia-based equities and assets and the critical roles each play in our national defense.

The media will be invited to meet with Isakson and the delegation at press briefings at each of the base tours.

Isakson is also chair of the Senate Committee on Veterans’ Affairs and has made it a priority in Congress to ensure our nation’s veterans are given the care and support they deserve once they have returned home from the battlefield. Isakson recently held an official field hearing of the Senate Veterans’ Affairs Committee in Gainesville, Ga., on August 21, 2015, regarding the Veterans Choice program.