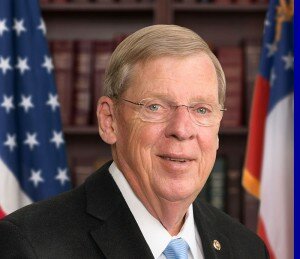 WASHINGTON – U.S. Senator Johnny Isakson, R-Ga., today applauded the Senate passage of the Every Student Succeeds Act, legislation that puts decisions affecting our children’s education back in the hands of those who know best – their parents, teachers, school boards and governors. During debate this week on the bill, Isakson called the reforms “a new chapter” in education that “focuses on student improvement, student achievement and sees to it that every child can succeed.”

Isakson is a member of the Senate Health, Education, Labor and Pensions Committee and served as one of the Republican Senate negotiators on a joint House-Senate conference committee tasked with reconciling the differences between the House- and Senate-passed reauthorizations of the Elementary and Secondary Education Act.

The conference report on the Every Student Succeeds Act was adopted today by the Senate by a vote of 85-12 and now heads to the president’s desk.

“With the passage of this bill, we end one chapter in education and open a new chapter,” said Isakson. “A chapter that focuses on student improvement, student achievement and sees to it that every child can succeed. This bill will make sure we disaggregate so we can focus on every child as they perform within their own groups in every school in America. I’m honored to have been a member of the committee that worked hard on this bill for every student, every superintendent, every teacher and every parent in America.”

During debate before a procedural vote on the bill, Sen. Lamar Alexander, R-Tenn., chairman of the Senate Committee on Health, Education, Labor and Pensions, thanked Isakson, who was chairman of the Georgia Board of Education from 1997-99, for his work on the education reform bill.

“The senator from Georgia is a former chairman of the Georgia state board of education so his experience there, his work with Senator Murray on early childhood education and his insistence on an amendment that gives states a right to allow parents to opt-out of federally-required tests all were major contributions to this legislation,” said Alexander. “I think it’s fair to say that we could not have fixed No Child Left Behind without Johnny Isakson’s experience and leadership. I’m deeply grateful to him for that.”

Isakson has long made education reform a priority. The bipartisan Every Student Succeeds Act is a long-overdue replacement for No Child Left Behind, which expired in 2007. This legislation will help remove Washington mandates from education, and instead allow those closest to students to set the agenda. Notably, the measure will end the previous federal overreliance on standardized tests that has led to complaints of over-testing, and the federal government’s Department of Education will no longer be able to impose Common Core or any other academic standards on states.

The Every Student Succeeds Act also includes language that was offered by Isakson in the Senate-passed version of the bill to ensure that parents have the information needed to make decisions on their child’s education by requiring schools that receive federal funding to notify parents of their rights to opt their children out of mandated testing.