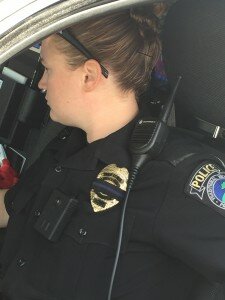 (Conyers, GA—September 23, 2015)  Conyers Police Officers have been issued and are already utilizing body-worn cameras during their daily duties.  This audio/video recording equipment will be activated for all dispatched and self-initiated calls/incidents as well as when contact is made or is expected to be made with the public.

“There are a multitude of uses that will benefit both the department and our citizens,” Chief Gene Wilson explains.  “Most importantly it promotes safety and professionalism as well as assisting in the judicial process.”

Body-worn cameras are the latest in law enforcement technology that can act as evidence when there are questions to the events of an incident between a citizen and a police officer.  The decision to go forward with this project is part of a continuous effort to best serve the citizens of Conyers by providing the highest level of police service possible.

The BodyVision cameras were ordered in April of this year from L3 Mobile Vision, the same company that installed and maintains the mobile video recorders in the department’s marked patrol cars.  This $53,000 project, which includes 82 cameras, additional server space, software and hardware, is financed by asset forfeiture funds. Two cameras were also issued to the Planning and Inspections Department.

No Responses to “Conyers Officers Equipped with Body-Worn Cameras”