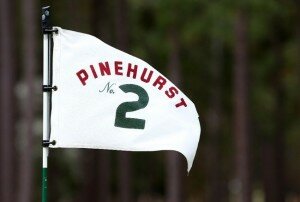 Martin Kaymer takes control early at Pinehurst No.2 and never looked back with a 72 hole score of 271, second lowest in championship history. He closed with a -1 under 69 for an eight shot win. I suspect NBC was not too thrilled with viewer ratings.

There were special moments that would inspire us all. One was Zack Johnson’s hole in one on the par 3 9th with a seven iron. Watching it roll down and trickle into the hole was nothing less than spectacular. But what really got my blood flowing was when he ran down both sides of fairway giving the fans high five’s. Just a class act in my book. You think you would ever see Tiger do that? I’m just saying.

Martin raced out to lead at Pinehurst No 2 on Thursday and was seriously challenged by the players behind him. This included co-runner up sentimental favorite Eric Compton. Hearing his story had my wife asking me which one he was -shocker. There are a few indisputable outstanding stories in the PGA and Eric Compton is one of them.

His story is both heartbreaking and inspirational. Compton, who tied for second w/ Ricky Fowler in the 2014 US Open, is on his third heart. He was diagnosed with a heart ailment at the age 9 and received his first transplant at age 12. In October of 2007 he suffered a heart attack and drove himself to a hospital where he had a second transplant. Compton has permission to use a golf cart but he’s trying hard to avoid that. Although he didn’t clear the 1.4 million dollar 1st place purse, don’t feel to sorry for him he did get nearly $700,000 for his share of second place. Now that will get your heart pumping!

The US Open always falls on the greatest day of the year, Fathers Day. I feel so fortunate to have my Dad (who is the greatest Dad I know) around to share our many golf adventures. Believe me there are many as it’s all he does!

I also very fortunate to have a wife who thinks I’m the greatest dad she knows. Dad NOT husband she reminded me. She proved this by the gift she gave me… a Bushnell patriot pack tour V3 laser range finder. YEAH BABY!

P.S. Sure hope my dad doesn’t read this article. He seems happy with a shirt.