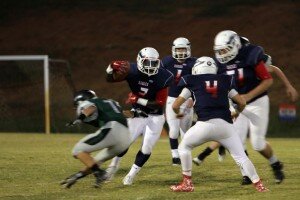 Conyers, Ga- September 21, 2015-Young Americans Christian School Varsity Football Team improved their record to 2-3 with another win against Cornerstone at their home stadium Friday, Sept. 18th.  The final score was 41-6. The Eagles were led by Drew Blount with 109 rushing yards and 2 touchdowns. Senior Ross Mahan went 4 for 4 in passing, had 122 yards combined, and 2 touchdowns. Defensively, Joel Barnes led the Eagles with five tackles.  Another major contributor to the game was Chase Latimer with two touchdowns.

Coach Tim Smith of YACS is in his first year as head coach of the Eagles. YACS participates in the Georgia Independent Christian Athletics Association.

Next, the Eagles travel to Macon to take on Covenant Academy on September 25th.