We All Can Play a Part in Preventing Child Abuse 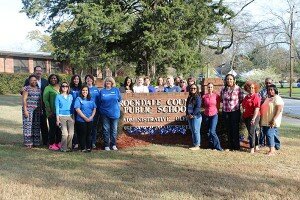 National Child Abuse Prevention Month is a time to acknowledge the importance of families and communities working together to prevent child abuse and neglect and to promote the social and emotional well-being of children and families. Rockdale County Public Schools (RCPS), Rockdale County Department of Family and Children Services (DFCS), and Prevent Child Abuse Rockdale (PCAR) are partnering this month to encourage all individuals and organizations to play a role in making Rockdale County a better place for children and families. Rockdale County Public Schools’ school social workers organized the planting of “prevention pinwheels” at the RCPS main county office location as well as the RCPS support services location on West Avenue. According to Prevent Child Abuse America, nearly five children die each day in the United States as a result of being abused or neglected. Every 35 seconds a child is confirmed as abused in the United States. “By ensuring that parents have the knowledge, skills, and resources they need to care for their children, we can help promote children’s social and emotional well-being and prevent child maltreatment within families and communities,” stated April Fallon, RCPS director of community and student support. Rockdale County Public Schools requires mandatory child abuse training for all staff each year. “Training our teachers is critical because they often are the first people to learn of a child whose safety is at risk. Subsequently, they take the next step in reporting suspected child abuse or neglect to school social workers and school counselors who determine whether or not a DFCS or law enforcement referral is necessary.”

Veronica Parrott, Director of the Rockdale County Department of Family and Children Services, states that in 2013 Rockdale County received 703 child protective service calls and of that number there were 206 investigations, 233 diversions to community resources, and 264 screen-outs.  Of these cases, 108 were substantiated for child abuse/neglect and 109 cases were unsubstantiated.  Ms. Parrott stated, “Child safety is the core of everything we do, so our commitments and obligations will be carried out with integrity, quality, and transparency.” She referenced the state acronym S.O.A.R which stands for Safety, Opportunity, Accountability and Relationship. Data from 2014 is not yet available.

Rockdale County Commissioners will sign a proclamation on April 7 declaring the month of April as Child Abuse Prevention Awareness Month. This proclamation will be introduced by Diane Howington, Director of Prevent Child Abuse Rockdale. Since 1989, PCAR has been dedicated to ensuring that all children are raised in a safe, loving, nurturing home free from all forms of abuse and neglect. PCAR offers Active Parenting classes each month – a list of dates can be found on the Prevent Child Abuse Rockdale Facebook page. You can also find information about the upcoming Trivia Night on April 21 at AMICI in Conyers. Proceeds support the efforts of PCAR.

“April is a time to celebrate the important role that communities play in protecting children,” said Fallon. “Everyone’s participation is critical. Focusing on ways to build and promote the protective factors, in every interaction with children and families, is the best thing our community can do to prevent child maltreatment and promote optimal child development.”

You can find more information about preventing child abuse, as well as tip sheets for managing stress, parenting your school-aged child, keeping your family strong, etc. at https://childwelfare.gov/