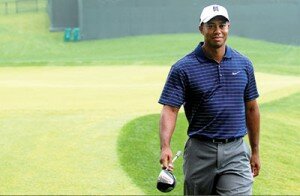 It’s right around the corner. Like you, I’m sure, We CAN’T WAIT! Although it may be true as Dan Jenkins wrote, “The Masters doesn’t start until the back nine on Sunday.” The pressure of the green jacket and five holes with water always seem to be the death to whoever has the lead.

Remember Greg Norman who lost the tournament with a six shot lead going into the back nine. I still remember feeling so sorry for him until I saw his post tournament press conference when he admitted choking and feeling awful about it. But in the same breath he told reporters not to worry, he was not going to kill himself. He had 50 million in the bank and he thought he would be just fine.

When Augusta was shorter and wider, going for was more prevalent, increasing the chances of large stroke swings. The tournament seemed to lose some volatility after 460 yards were added from 2002 to 2006. However,the club responded by making the back-nine par 5s more accessible on Sundays. And Charl Schwartzel(2011), Bubba Watson (2012), and Adam Scott(2013) all made extended late birdie runs on their way to victories.

The question is who will be modeling the famous “Green Jacket” this year? I think it’s safe to say it won’t be Tiger Woods. His chance of winning this year’s Masters is ZERO if his earlier chipping problems persist or recur, or if his latest absence from the game includes missing the tournament. I don’t have much faith on Phil Mickelson coming out of his slump either. Although a left handed golfer appears to have a slight advantage playing that big power fade. Left handers have won six of the past 12 tournaments. Maybe lefty’s like Bubba Watson is a possibility but I find it hard to believe Phil will be modeling any green jacket this year.

What about Sergio? He’s playing well these days and I would pull for him except that he just seems to have a problem closing the deal down the stretch. My $$$ will be on Rory Mcllory winning his first green jacket to complete the career Grand Slam, giving him three legs of a “Rory Slam” and leaving no doubt that golf has entered the Mcllory Era.

Speaking of chances, if there is anyone out there that actually reads this article and if they do read it and have Master’s Tickets, and if they do read this article, have Master’s tickets, do not want to go and would like to donate their tickets to this poor lonely Master’s deprived author, I would be ‘Oh’ so willing to take them off your hands. Plus I would be glad to recognize you in next month’s article with highest regards.

I know the chances of that happening are the same chance I give Tiger on winning–ZERO.

Till Next Tee time.

One Response to “The Masters”