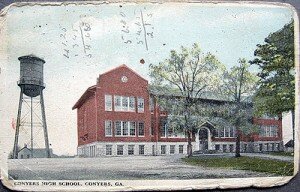 I don’t know exactly when Conyers High School (CHS) closed its doors for all time. I must have been out of the country, maybe working for Uncle Sam, or elsewhere, but it may have been as late as the early ’60s. I mention the closing because there is a group of folks who meet and eat each month at a local restaurant. They have referred to themselves imaginatively as “The Lunch Bunch”.

Some in the group live far away from Conyers–as far as Maryland and California–but they all have one thing in common. They attended CHS at some point in their lives or are married to someone who did. Not Rockdale High, but Conyers High on North Main Street. “It is a strong band that shall ne’er be broken,” as the CHS Alma Mater predicted. The group meets monthly from January through October, taking a break for the holidays in November and December. All cannot attend every meeting, of course. Some come rarely, especially those from far away places, but the meeting is held, even if only a small number can make it. It’s sort of like “the show must go on”.

The luncheon is a sort of mini-reunion held each month. There is usually someone present who hasn’t been there recently or never before. The group does a lot of reminiscing about days long gone and catches up on the news of common interest. They reflect on things like the old three-story high school building with heavily oiled wood floors that really messed up your clothes if you ever fell–which boys often did as they scuffled in the hallways, particularly in rainy weather. They reflect on how the furnace was located in a basement recess that flooded whenever the heavy rains fell, extinguishing the fire and resulting in a school holiday if it occurred in cold weather.  Then there was the scarcity of paved roads in the county that created other holidays when the few buses we had couldn’t travel their routes in the deep mud of the roads. Another reflection, “How you could buy a “plate lunch” for a dime, milk for two cents, and a peanut butter and raisin sandwich for three cents?” The Lunch Bunch also recall hijinks of some of the students, like those responsible for pouring a can of black pepper into the air intake of the heating system.  The result was airborne pepper entering the classrooms via the forced air ducts of the system.

There is discussion and disagreement about heavy subjects like whether Julian Bennett flew his Army Air Corps plane between the old water tank and the building, or whether he simply flew low over that narrow space. Most recall the war years–WWII “the Big One” and how the farms were short-handed with so many of the menfolk gone to war.  School was out for 6 weeks during planting season then reconvened during the summer and was out another 6 weeks in the fall harvesting season. There was “The Victory Corps” composed of upper class men who marched around on the campus each day. Many of them probably marched on fields far away before the war was over.

There has been a suggestion that the name of the group be referred to as the Conyers High School Alumni Association. The thought being that such a name would be more sophisticated and carry more cachet than the name “The Lunch Bunch”. The suggestion also included the allowance that any past student of CHS is eligible for membership and shall immediately become a vice-president with all the rights and privileges pertaining thereto. Each luncheon convenes with the ringing of a bell–a cow bell. The Honorable Jerry Mills is our reluctant President and he is the official bell ringer as well. It is doubtful that the group will give the suggestion any serious consideration. It didn’t receive much support when it surfaced. I hope they do. Maybe I can be a vice-president of something at last.

2 Responses to “The CHS Lunch Bunch”

Load More...
Tweets by @eMetroTimes
The location could not be found.