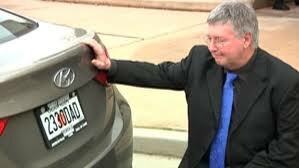 Deputy Mahaffey’s mother, brother and sister each have the special plates – 2330MOM, 2330BRO and 2330SIS—in honor of the deputy who was killed in the line of duty in 2010 while serving a warrant in Rockdale. The family had been trying unsuccessfully for years to obtain the plate for Deputy Mahaffey’s father and reached out to Tax Commissioner Hadley for help. Hadley consulted with state motor vehicle officials and after two months was able to secure the plate.