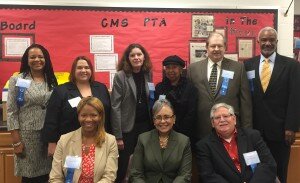 The November 7, 2015 Rockdale Middle School Oratorical Competition was more, more, more. More students participated because it was open to all Rockdale County Public Schools Middle School students. There was participation by all four Middle Schools and all three grades: sixth, seventh and eighth. There was more scholarship money given away because more sponsors were involved. In addition to Clerk of Courts Ruth Wilson, top sponsors include the Rotary Club of Conyers, Lexicon Technologies, Evans Tool and Die and Snapping Shoals.

The First Place Winner for Sixth Grade is Margaret Hwang of Memorial Middle School. She spoke on Why Should I Volunteer. Corey Kidd of Davis Middle School won First Place for Seventh Grade speaking on Imagine A World Where…And the First Place winner for Eighth Grade is Chaz Dooley of Davis Middle School who spoke on What It Means To Be A Leader. All First Place winners receive cash prizes of $500. Second and Third Place winners receive prizes of $350 and $150 respectively. Winners and their parents were encouraged to start now their college savings following a presentation by the Georgia Student Finance Commission Path 2 College 529 Plan. Several students committed to saving at least half of their winnings.

Rockdale School Superintendent Richard Autry kicked off the competition with a rousing admonition to all that academic opportunities such as the Oratorical Competition should be pursued by students and supported by the public. “It is important that students are given these opportunities to not only showcase their academic talent, but to compete in academic extracurricular activities,” says Superintendent Richard Autry.  “We truly appreciate the partnership with the Clerk of Courts Office to create this oratorical competition and give students the chance to be awarded for their hard work and oratory talent.”

“Lexicon is honored to partner with Clerk of Courts Ruth Wilson to support the Rockdale Middle School Oratorical Competition”, said Lexicon Technologies CEO Travis Collins. “Our team feels strongly that supporting our public schools and encouraging students to strive is an investment in a brighter future for all.” Collins was on hand to congratulate all the participants and emphasize again his support for Rockdale County Public Schools.

Plans are underway for the Fall 2016 Oratorical Competition with an expanded group of Public/Private Partners and sponsors. Questions may be directed to Cindy Ball of Rockdale County Public Schools at 770-860-4226.