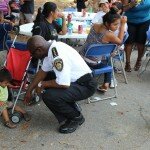 Sheriff Eric J. Levett and Deputies from the RCSO hosted a block party on Saturday July 18, 2015 in the Lakeview Estates subdivisions. The block party was a way to bring neighbors together for the purpose of making the community better. Residents were able to interact with Sheriff Levett and members of the RCSO. The RCSO has held several block parties each year since 2013 and is committed to bridging the gap between neighborhoods and Law Enforcement.