Restaurants That Have Disappeared ! 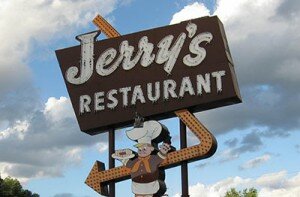 I was reading one of the many nonsense messages you get on Facebook everyday.You know the ones about who is dating Michael Jackson in Heaven or did you know Caitlyn Jenner gave birth to twins? You know just plan on old useless junk. But, we bite and look at anyway.

However, every now and then you do get an interesting one. Last week one came over and I am sure many of you saw it. It was titled, ”The Top 10 Restaurant Chains That Have Died or Are Disappearing”. With that thought I started thinking back to my days of growing up and what great LOCAL restaurants are no more, for whatever reasons.

I mentioned recently the Original DQ that was in my town and served a great foot long chili dog. The old place is gone but the “dog” lives on as a 6-incher at Hickman Street Grocery, so…not a total disappearance, just hiding out!

But, there are some great ones that did not survive over the years. The most popular and I think the most missed in Winchester, Kentucky is Jerry’s Drive In. Now for those of you who have never ventured past the Mason Dixon line into the territory of the Northern Aggressors, you may have never heard of this one. I KNOW, Kentucky is a border state and no one in their right mind would declare allegiance to the Aggressors, but they do have a few redeeming qualities when it comes to food!

Jerry’s is somewhat of a chain with local ownership. It is a northern version of Shoney’s or Big Boy’s . They had the double burger (The J Boy) LONG before Ray Kroc ever thought of a Big Mac. The hook at Jerry’s was it was a true drive-in with a canopy outside with speakers and all, similar to today’s Sonic. However, the biggest plus was it was the local hangout to cruise. Lap after lap, hour after hour, drive around in a circle, day in, day out. No troubles in those days. We were just wanting to be seen and have fun. We need more places like this.

Others on the list are Corner Drug Store. Yep, this was a drug store on the corner of Main and Broadway with a lunch counter. They had the BEST homemade burgers in town. Their demise came after moving to an old car dealership because their building had been condemned. It just wasn’t the same, eating lunch in the showroom where a shiny new ’66 GTO’s used to rule supreme. Charlie Stephenson would roll over in his grave!

Other downtown spots gone are the two pool rooms. Hoods (or so my mother thought) hung out there. I can hear her saying, “So I don’t want to catch you going in any of those.” Of course they served a mean hot dog too. And I went in. Never got beaten up by said HOODS! I think time caught up with pool rooms so they are gone. Now replaced by air conditioned billiard halls with no cussing. How fun is that?

Quisenberry’s Restaurant was probably the first “Meat and 3” we had in town. This was the gathering place for farmers, bankers, lawyers, and others from town to gather for lunch. It has great cooking so I am not sure why they closed. It was probably due to death of the owners and that Interstate coming through with those chain burger joints.

There are many more that I am not sure exactly why they closed: Carl’s Bar-BQ, The Original Steak House, Jackson House (similar to Krystals), Larry’s Restaurant (where my grandmother and I would take a cab to go downtown to eat Chocolate pie)-mmmm, damn that was good pie! Marsh Dairy, which was bought by the Bickett’s and changed to Bick’s, had great ice cream and was the perfect place to go to skip church on Sunday. “I promise Mom I went to the Baptist church with Pam and her family” lol. Us Methodist could lie with the best of them! And there was Flynn’s Restaurant on Boone Avenue. This was the high school soda shop in the 50’s and early 60’s LONG GONE and just recently torn down. Great ice cream as well.

That about covers the in-town places but some of the best that are gone were on the Kentucky River. At Cornett’s you’d hear, “Howdy Neighbor” when he seated you. I believe his death closed the store. The Sandpiper was a floating restaurant. It sank, and that will put you out of business in a heartbeat. Allman’s Restaurant, home of the original Beer Cheese, had many floods and two fires that will doom a building ten miles from the closest fire house! It is a parking lot now for the restaurant made of BRICK across the street.

The Hall Family read Little Red Riding Hood I do believe. Hall’s Restaurant has been hit by many floods but it still stands today. As I look back at all of the old haunts that are gone, I hope Hall’s never shows up on the list of Restaurants that have disappeared from Clark County. That would be a sad passing indeed.

2 Responses to “Restaurants That Have Disappeared !”