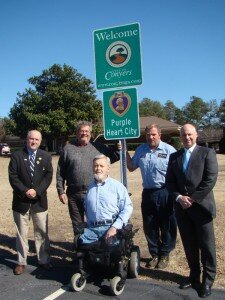 February 13, 2015 – Conyers officials proclaimed the city as a Purple Heart City in December 2014 and later this month, signs proclaiming it as such will be erected on city limit signs throughout the community thanks to a local donor.

City staff collaborated with Tommy Clack, chairman of the Walk of Heroes Foundation, to order and install street signs denoting Conyers as a Purple Heart City. Funding for the signs was generously donated by veteran and local businessman Greg Grimes of Patriot Storage.

“We are grateful for the service and sacrifices made by all of our veterans and those recognized as Purple Heart recipients in our country and this community,” said Mayor Randy Mills. “These signs are just one way we can publicly thank them and show our support. We are very appreciative of Mr. Grimes’ donation of the signs.”

The Purple Heart City signs will be installed by Conyers Public Works and Transportation employees along the following roadways that denotes motorists are entering the city limits: