Print is not dead. Just Sayin’. 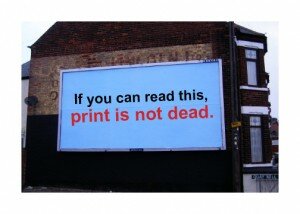 I was enjoying lunch at the Conyers-Rockdale Chamber of Commerce Luncheon last month when the speaker from one of the other local newspapers started his sales pitch. He was spouting the benefits of their online newspaper when he said, “Let’s face it, newspaper readers are dying off.”

I almost spit my drink out, which I’m sure my neighboring networkers would not have appreciated. I thought, ‘Wow! Foot-mouth syndrome, worse than mine?!’

Having just had a post 40th birthday in the same week, I thought to myself, “Wow! I’m pretty sure this guy just called more than half of his audience old and dying.”  Don’t get me wrong. I own a web development company. We developed eMetroTimes.com and manage Social Media campaigns for over 50 companies. My household has six computers for three people, and that doesn’t even include tablets and phones.

I believe in the internet Kool-Aid. I am a blogger, techie, gamer, geek. I love the internet and all of the convenience it brings. I am plugged in. Expansion for eMetro Times into the interwebs? Absolutely!

Why in the heck did I agree to manage the print side of eMetro Times then, you ask? Especially when ‘newspaper readers are dying off’? It’s simple. I also believe in the power of print. That tactile feel of the paper as you read it. The stories and photos that share your neighborhood stories. It’s a physical thing that you can take with you to discuss with a friend over coffee while you look them in the eye and have an actual conversation. You remember those, don’t you? You know, conversations where you actually laugh out loud instead of typing LOL?

My eight year old daughter brought it home to me when she said, “I’m glad you like your Kindle, Mama, but I like to read an actual book.” My daughter who has had an iPad from the age of three; the same girl who loves to play video games with me on family day prefers paper over digital.

Over the holidays, we went to an enormous Barnes and Noble where I grew up just so she could experience what it’s like to go to an actual bookstore. She was in awe! We spent more time there than we did at the American Museum of Natural History in New York City. She was enthralled at the library-sized room of used books and decided then and there that she will single-handedly save bookstores from extinction. She began drawing up a plan for a special bookstore business where she will serve homemade muffins and cupcakes, and people can lounge, read books and eMetro Times.

I looked on with pride as she filled up her notebooks with diagrams and menus. It filled my heart with joy that she was taking her business plans so seriously and that she wanted to fill this need and void in society with something special.

Bookstores. I miss the Tattersall’s that used to be on the corner in Olde Town. She’s right. There’s something to be said about slowing down and relaxing with a good book, magazine, or newspaper. eMetro Times isn’t going anywhere and as a newspaper, our growth has been a blessing and a testament to you, our readers! You are proof that newspaper readers are going strong and print is not dead.

No Responses to “Print is not dead. Just Sayin’.”