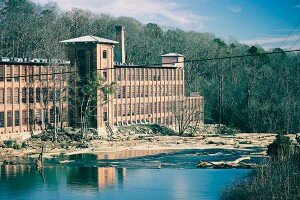 The town now known as Porterdale was nothing more than a cotton patch in 1830. It had been nine years since the Georgia General Assembly had formed Newton County on land ceded by the Creek Indian Nation and located Covington as the county seat in the middle of the new county. But residents of the seven dwellings in the little settlement three miles south of Covington called it “Cedar Shoals” because of the many cedar trees along the banks of the Yellow River.

Business establishments in Cedar Shoals included a grist mill, blacksmith shop, saw mill, foundry, and a small country store. But Noah Phillips, a young man from Litchfield, Connecticut, had a bigger dream for Cedar Shoals. Noah Phillips had learned the wool and cotton carding business working in mills in Pennsylvania and Tennessee, and by 1820 had made his way to the frontier village of Athens, Georgia. There, he worked in some of the first mills going up on the Oconee River.

Growing impatient with years of working for other people, Phillips began investigating sites to construct his own operation. He found the ideal location beside the Yellow River in Cedar Shoals.

Along with his brother-in-law, John Persall of Athens, and capital of $40,000, Phillips bought land and erected a wool carding and cotton factory beside the river called Cedar Shoals Manufacturing Company. The factory had 1,184 spindles, ten looms, and was operated 12 hours per day by 45 employees who earned $5.75 per month. Water powered the machinery, but there was no heat, air conditioning, or electricity in the mill. It was warmed by a single wood stove and lighted with oil lamps. Noah Phillips died in 1864, and is buried alongside his wife in the Porterdale Baptist Church Cemetery. But the mill he founded had spawned the growth of a tiny settlement called Cedar Shoals into a bustling little village.

The partnerships and ownership of the mill changed hands several times over the next 50 years.  It was not until Bibb Manufacturing Company of Macon bought the operation in 1890 from a group of owners, which included prominent Newton County businessman Oliver S. Porter, and renamed the factory Porterdale Mill. On March 10, 1917, voters in Cedar Shoals voted to incorporate their town and to renamed it Porterdale after Porterdale Mills, Inc. and Oliver S. Porter.

Bill Blair grew up in Newton County and attended Newton County High School where he met his wife of almost 50 years, the former Jean Spears of Mansfield. He attended Emory at Oxford, the University of Georgia and Georgia State University. He graduated from Georgia State with a BA in Public Relations and Journalism. Bill retired from AT&T after 31 years’ service in 1996. During that time, he worked in Washington, D.C., Charlotte, N.C. and in Atlanta in sales and marketing. He was transferred to Columbia, S.C. in 1984, and Nashville, TN in 1986 where he was Director of Public Relations for the States of South Carolina, Tennessee and Kentucky. Bill and Jean returned to the Atlanta area in 1992 to join AT&T’s Olympic Marketing team, planning for the corporation’s sponsorship of the 1996 Olympic Summer Games. Bill was responsible for developing the concept and operational plans for the AT&T Global Olympic Village in Centennial Park and AT&T’s Family to Family Program which housed Olympic athletes’ families, during their attendance at the Games, with local Atlanta-area families. After retiring from AT&T, Bill founded image international, a sports marketing company, developing Olympic marketing programs for National Olympic Committees and worldwide corporate Olympic Sponsors. In that capacity, he consulted and directed marketing programs during eight Olympic Summer and Winter Games, and the Asian Games in Bangkok, Thailand. In 2002, tired of being out of the U.S. more than he was home, Bill closed image international, and is currently a Realtor® with Coldwell Banker Real Estate in Covington. Bill and Jean have two daughters, Sharon Enoch of Augusta and Angie Blair of Covington, and four grandchildren.

No Responses to ““Porterdale” Incorporated”