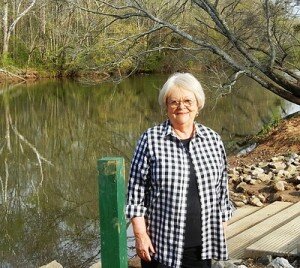 Porterdale Mayor Arline Chapman in front of the new kayak and canoe launch at Yellow River Park in downtown Porterdale.

Porterdale Mayor Arline Chapman is seldom at a loss for words–especially when promoting her city.  But, she’s been sitting silent for a very long pause, and I’m worried I’ve stumped her.  Maybe it’s an unfair question:  describe everything going on in Porterdale in one word.

She finally blurts “an explosion of good,” and I think it’s a strange combination of words.  It feels a bit forceful for a small town with one traffic light (and a long-awaited second one coming soon).  But, as she rattles off the litany of grass-roots, people-powered community improvements springing up around town, goodness is undeniable.  Pocket parks, a kayak launch, woodland nature trails, tree plantings, picnic areas by the river above and below the dam, a “bean house”, a volunteer library, and a community garden…  good is blooming all over town!

Explosions imply destruction, yet Porterdale is a place that preserves its past.  The historic and picturesque Porterdale Mill was converted to loft apartments in 2006, while opportunistic newcomers and long-time residents continue to renovate homes which once housed the mill owners, management, and workers.  Old warehouses lining Main Street are now filled with restaurants, shops, salons, and entertainment venues.

Even a devastating 2005 fire which gutted the historic Porterdale Memorial Gym failed to rob this town of its past, when the gym’s brick façade reopened last year as event space.  Down the hill, the old Central of Georgia Railroad depot houses a kayak rental business (the Porterdale Yak Club) and a small public library Chapman spearheaded herself while on City Council before running for Mayor in 2011.

She and other volunteers created the library without public funds using donated books and volunteer staff.  The idea was later expanded with freestanding Little Free Library boxes around town, each hand-painted by a local artist, where locals can “take a book, return a book”.  An artist herself, Chapman read about the national program in a magazine and used connections in the local art community to create a diverse set of unique boxes.

If the mill and surrounding business district are the heart of Porterdale, then the Yellow River is the artery carrying its life blood.  I asked Mayor Chapman how someone who grew up in Porterdale and moved away might be surprised if they returned today, and she shared a story.  “I went down to the river the other day,” she said.  “And, there was a couple from Loganville, visiting for their second time.  They were just fishing in peace.  All I could say was just ‘God Bless You’.  People love it down there.  It’s just so beautiful!”

In 2011, Newton Trails partnered with the City of Porterdale to secure a technical assistance grant from the US National Park Service (NPS), through the Rivers, Trails, and Conservation Program.  Joined by stakeholders like the Yellow River Water Trail and Friends of Porterdale, NPS landscape architects helped the city build a conceptual plan and roadmap for the already evolving park.  The Yellow River Park will transform the area along the river north and east of the Main Street (Georgia Highway 81) bridge.  Already in place are a quarter-mile, concrete-paved loop trail built by Newton Trails in 2006, a natural-surface hiking trail between existing wetlands and the river, and a concrete launch area opened last summer to make the river more readily accessible to kayakers and canoeists.

The railroad depot is the anchoring landmark for what will become the park’s gateway.  Restored in 2007-2008 with a grant from the Georgia Department of Transportation (GDOT), the depot will serve as a trailhead, welcome center, and comfort station for those enjoying the paved trail to be constructed between Main Street and the existing loop trail.  Newton Trails raised and gifted funds in 2011 to move a boxcar donated by CSX Corp. and placed it on newly installed rails beside the depot.  The trail construction and additional depot enhancements were funded through another grant awarded in May 2011, but the exact timeline is dependent on GDOT officials.

The overall Newton County greenway plan calls for the Yellow River Park to be connected to Turner Lake Park in Covington via the Turkey Creek/Yellow River Greenway.  That project was partially funded through a series of grants, federal earmarks, and SPLOST funds that allowed engineering work to begin in the mid-2000s, but attempts to begin construction were placed on hold by the county last year when agreement could not be reached for an easement to cross a significant stretch of private property along the river beyond the land already owned by Porterdale.

Mayor Chapman remains undeterred, however, and City Manager Bob Thomson and Public Works Director Robert Witcher forge ahead daily on some small effort to bring the park and it’s trail system closer to reality.  This January, as part of the local Dr. Martin Luther King Jr. “A Day On” celebration, more than 50 volunteers from Newton Trails and other organizations spent the morning clearing the woodland hiking trail between the wetlands and the river, and connecting the depot parking lot to the paved loop trail and the kayak launch.  That same week, Witcher and his crew had built a new wooden bridge over a ravine, making the trail more accessible for those seeking a pleasant stroll through the woods.

More recently, workers constructed a “bean house” of tree limbs and branches strapped together into the frame of a small house.  Green bean vines have been planted to cover over the structure, giving a nice, green welcome to those visiting the trail.

Mayor Chapman was asked what secret ingredients have enabled a small town like Porterdale to create so much incremental good without the grand plans and larger budgets of bigger towns.  She gives much of the credit to community volunteers and city staff.  As an example, she pointed to a new stand of large trees planted along the loop trail to bring shade to runners, walkers, and people on bikes.  She credits Witcher for the trees, explaining her role was to empower him, Thomson, and the rest to find creative ways to make good things happen.

For her own part, Mayor Chapman smiled and said, “There are certain advantages of old age.  I can be a little persistent.”  That persistence and this “explosion of good” are things that will never get old.

No Responses to “Porterdale Experiencing “Explosion of Good””