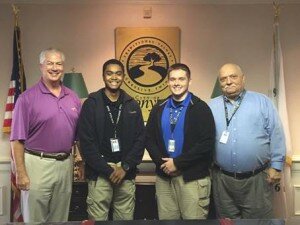 Conyers, GA —  Newly budgeted positions plus experienced teen Explorers will pave the way for the future of the Conyers Police Department. Cadets William “Will” Treadwell and Quantavis “Q” Garcia have made Conyers Police history by becoming the very first full-time Cadets at the department.

Law enforcement agencies across the country are facing the same problem.  Finding and recruiting qualified applicants is a difficult undertaking when other agencies may offer higher pay or other incentives that may be more attractive to the quality applicant.  Faced with this dilemma, Police Chief Gene Wilson looked to our own Explorer program and realized our quality applicants have been under our own roof for years.  The question became how to we retain the teenagers until they are old enough to become full-fledged police officers.

In a proposal first made to the city council during their winter retreat in January, Chief Wilson introduced a new Cadet Program into the 2015-2016 budget.  The new budget includes two cadet positions at the police department which would offer full-time jobs to graduates of the current police Explorer program.  The Explorer program has been a very successful volunteer program where local teenagers learn and train with Conyers Police officers and compete with other police Explorers throughout the country.  The new cadet positions would start 10% below an entry level officer salary and would be put to work in various parts of the police department.  Cadets will learn the dispatch center, records, courts, criminal investigations and other functions within the department as they come of age to eventually be put through the police academy.  This career pipeline would encourage them to stay at the Conyers Police Department due to local ties and community pride.

“Our hope is that these local teen Explorers who grew up in Conyers, their family is in Conyers, they are educated in the Rockdale County school system, will grow to be a cornerstone of the Conyers Police Department,” says Chief Wilson.