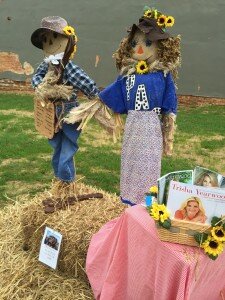 Monticello’s Better Downtown Development director, Sage Edwards, asked the community to provide a scarecrow on the square.  They were judged during the 49th community deer festival.  Piedmont Academy’s Alumni Association in honor of the Class of 2016, placed first in the contest with their scarecrows, “Trisha & Garth.”