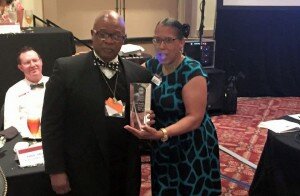 Toastmasters Simmons brings both leadership experience and success to the table. Besides being awarded as Division Governor of the Year and Club Growth Director Elect, Toastmaster Simmons earned his Distinguished Toastmaster (DTM) award.  He received his DTM medallion award at a special award ceremony during the District 14 Spring Conference.  The DTM award requires a Toastmaster to complete at least 40 speech projects and multiple leadership projects including serving various officer roles, assisting in the formation and success of clubs, and mentoring.

Toastmaster Simmons said about his leadership philosophy, “We are working together as a team to build long-lasting relationships, partnerships, and alliances which establishes an environment to empower all of us to achieve excellence.”

Every year District 14 Toastmasters holds a Spring Conference with educational workshops, speech contests, awards ceremonies, District elections, and a lot of fun.  District 14 is part of Toastmasters International, a professional organization focused on developing communication and leadership skills.  There are hundreds of Toastmaster members within the District, which covers most of Georgia and has clubs located east and south of I-85 representing it.

If you are interested in being a part of Toastmasters and want to learn more about how you can improve your communication and leadership skills, there are two clubs in Conyers (Toast of Rockdale and Conyers-Rockdale) and a newly chartered club in Covington (5 Star Leaders).  Toast of Rockdale club meets every Tuesday at 12:00pm at St. Simon’s Church at 1522 Highway 138 N, Conyers, Georgia.  Conyers-Rockdale Toastmasters club meets every Monday at 7:15pm at Springfield Baptist Church at 1877 Iris Drive SE, Conyers, Georgia.  5 Star Leaders meets every Monday at 11:00am at American Realty, 1123 Church Street, Suite 103, Covington, Georgia.  You are welcome to visit any of these clubs or go to www.toastmasters.org for more information.

No Responses to “Local Toastmaster John Simmons Recognized for Leadership”