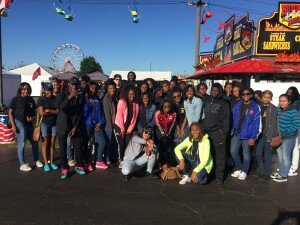 Perry, GA – Youth from the Heritage High School chapter of Family, Career and Community Leaders of America (FCCLA) recently participated in a motivational rally held on Wednesday, October 14 at the Georgia National Fairgrounds in Perry, Georgia. Over 4,700 students and advisers from schools across Georgia participated in the leadership rally session and competed in events. Along with other advisers and members from across the state, Heritage’s FCCLA Chapter Adviser, Jessica Wammock, accompanied 38 members to the meeting.

The Georgia National Fair competitions began on Tuesday, October 13 with students competing in the Annual Chili Cook-Off for high school and middle school students. The next day, students attended the 2015 FCCLA Fall Leadership Rally in Reaves Arena. The “Together We Are…Going Beyond” theme was used throughout the rally. The motivational rally was followed by the Peanut Recipe Contest sponsored by Georgia Peanut Commission, the Family and Consumer Sciences Knowledge Bowl, Culinary Knowledge Bowl, Middle School Knowledge Bowl and the Culinary Competition.