COVINGTON, Ga. (July 9, 2015) – Firefighter Kevin Smith was presented with the Firefighter of the Quarter award today by Chief Stoney Bowles. 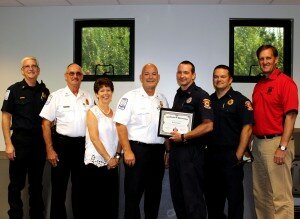 Recently while off duty and eating breakfast in a local restaurant, Smith was approached by a local man who was excessively aggressive and causing a disturbance in the restaurant. Firefighter Smith not only managed to calm the man, but ended up buying him breakfast.

“I tell all of our firefighters that I demand operational excellence,” Chief Bowles said. “Every time the horn goes off, we must operate at the highest of standards. I can’t demand excellence of our men while they are off the clock, but Kevin showed it. I couldn’t be prouder of the way Kevin handled himself and represented our City while not on duty.”

A firefighter must nominate a fellow firefighter for the award, making the recognition even more meaningful.

“To be nominated by your peers for the job you do means a lot,” Smith said. “The firefighters I have the pleasure of working with are men of the highest integrity, so to receive this award and be nominated by them is hard to put into words.”

City Manager Leigh Anne Knight noted that Smith going out of his way to neutralize a situation at a time when he didn’t have to is commendable.

“Having people represent the City of Covington like this make me proud,” said Knight. “Public safety officials are often times held to a higher standard and Kevin exemplified this standard in an off duty situation. That speaks volumes of him as an individual and we are thankful to have this caliber of employee.”