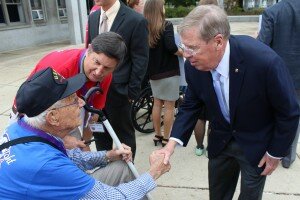 The veterans from Conyers, Ga. traveled to Washington, D.C. with the Honor Flight Conyers program as part of the National Honor Flight Network, which transports veterans to visit their war memorials in the nation’s capital.

“Having the opportunity to welcome our veterans — the greatest generation — who have sacrificed so much for our country to D.C. is one of the best parts about my job,” said Isakson. “It was an honor to be able to hear their stories and thank them for their service today.”

The Senate Committee on Veterans’ Affairs is chaired by U.S. Senator Johnny Isakson, R-Ga., in the 114th Congress.

Isakson is a veteran himself – having served in the Georgia Air National Guard from 1966-1972 – and has been a member of the Senate VA Committee since he joined the Senate in 2005. Isakson’s home state of Georgia is home to more than a dozen military installations representing each branch of the military as well as more than 750,000 veterans.