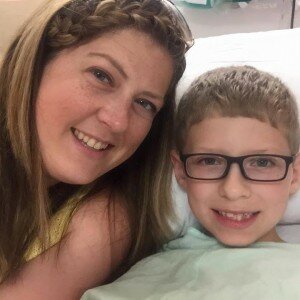 When Graham was a baby, he never learned to crawl. He would scoot on both hands and use his right knee. He would drag his left leg behind him. He went from scooting to walking. His left leg had a slight bowing in it and after discussion with his pediatrician, she referred him to an orthopedic specialist at Children’s in Atlanta.

After a long six month wait, Graham was diagnosed at the age of 2 with Ollier’s Disease, also known as enchondromatosis. It is a condition where multiple benign tumors of cartilage are found throughout the bones, leading to limb length discrepancies and deformities. It is quite rare, occurring in 1 out of 100,000 individuals; it occurs more in males than in females and is a non-hereditary condition.

Graham has been seeing the doctor in Atlanta for x-rays at least every 6 months (sometimes more frequently) since he was 2 years old. The doctor plots points and studies his bone growth. For Graham, the disease mostly affects the growth plate where the knee and femur bone meet. This causes his bone to rotate inward and slows the growth of the femur bone, resulting in his left leg being shorter than his right leg.  He also has the disease in other bones throughout his body, but right now the other spots do not affect his growth. To aid him in walking he has used a shoe lift that has gradually increased in height.

In 2012, it was determined that Graham needed surgery to rotate and straighten his leg and hopefully buy some time before he would need additional surgeries. In June of 2012, he had his first surgery. The doctor attempted to overcorrect his leg, hoping for additional length and to buy even more time. However, the diseased area crumpled and left him with a perfectly straight leg. After the cast removal it was determined that the doctor was unable to gain any length. 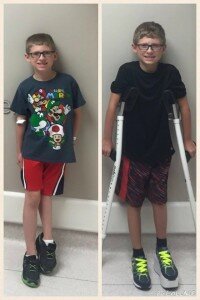 Graham began his kindergarten year of school in a wheelchair. Through physical therapy, he was able to regain his range of motion and was walking again a few months later. We continued with x-rays and plotting points until the time came when there was a 12 cm difference between his two legs. The doctors in Atlanta did not recommend raising his shoe lift any higher in fear of him twisting or breaking his ankle.

In the fall of 2014, it was evident that Graham would need to have a special surgery to lengthen his bone so that he would be able to continue walking. His orthopedic doctor in Atlanta decided that he needed a doctor who performed lengthening surgeries more frequently. However, there are not many out there and we began to search. Out of convenience, we went to the top orthopedic surgeon in Atlanta (the one known for the best results in orthopedic deformities). Sadly, we left his office devastated. He offered to do the surgery that Graham needed, but told us that more than likely we would end up opting for amputation in the end.

This really hurt my heart and deep down I knew that I wanted to know that I did everything that I could before we chose that route. Our doctor didn’t like that answer either. She felt very strongly that something could be done for Graham. After more research, I came across the Paley Advanced Limb Lengthening Institute in West Palm Beach Florida.

On the website was a video telling about Dr. Paley and the clinic, plus there were patient testimonials. The last patient interviewed was a patient with the same rare bone disease as Graham. I broke down into tears as I heard his testimony. How he at age 9 he and his family sought help from Dr. Paley after another doctor wanted to amputate. I saw his before pictures – his legs looked just like Graham’s. I saw his after pictures, too. He is now 25 years old with 2 flat feet on the ground and he’s training for a triathlon.

In that moment, I knew that God had led me to that website and that somehow, someway, we had to get to Florida to see Dr. Paley. At this point Scott and I turned everything over to God and He heard our prayers and has been leading our journey ever since. After a lot of difficulties and sickness, we made it to Florida in December of 2014 for our first consultation with Dr. Paley.

It is so hard to make life decisions for your child that has a rare disease. Everyone we saw had to research the disease; no one really knew anything about it. It was a relief knowing that Dr. Paley had a least one patient with the disease. At the clinic we found out that they have several patients with the disease and most had been treated successfully.

God had provided us with a capable medical team. They studied Graham’s x-rays and came up with a surgical plan. In the plan, we found out that it would require us to live in Florida for four months and that Graham would have to wear external fixators: one on the femur bone and one on the tibia bone. The fixators looked similar to a cage and the rods and pins go through one side of the leg into the bone and out the other side of the leg. The rods and pins attach to metal rings going around the leg. We would have to turn the pins three times a day to separate his bone and in turn, new stronger bone would grow in the gap and lengthen the leg. 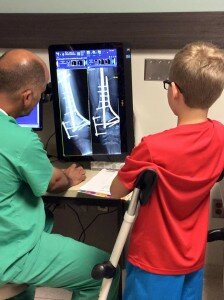 I know it sounds terrible, but this was Graham’s only chance to save his leg and after a lot of prayer we decided that we would go ahead with the plan. A surgery date was then scheduled for May 6, which would only require Graham and I to miss 2 months of school. My husband, a NCSS Teacher and other son would finish school in May and stay with us during June in Florida, and then return to Covington at the end of July to start the new school year. My mom and Dad were able to come and help in both in Florida and Georgia.

The Hope for Healing Foundation out of Alabama offered us a grant to help with our housing in Florida and our school created a very successful fundraiser, Run 4 the Rains 5K, where many from the community donated time and services. A few days after the 5K, the Covington Police Who Care showed up at Scott’s school with a check to help us as well and to let us know that Graham had been chosen as this year’s humanitarian fund recipient for the Fuzz Run. What a blessing! We can’t express how appreciative we are to the Fuzz Run Committee and the Covington Police Department.

On May 2, we left for Florida and attended pre-op. That day we received a miracle. We found out after x-rays that Graham’s growth plate in the tibia was showing activity and they no longer wanted to put an external fixator there at this time. We were also told that his femur bone had thickened and that now he was a candidate for an internal fixator.

This was a huge blessing! You see, with an internal fixator there is less chance of infection, no open wounds, and less pain because you turn the pins with a magnet instead of by hand. In fact, you don’t even feel anything when it turns, just a cold machine on your leg. I remember crying tears of joy of this news.

The next morning, surgery began, what should have been a three to five hour surgery ended up being a nine hour surgery. When the doctors got in, there was much more to be done to the knee than planned. They ended up having to reconstruct his knee. Once the knee was reconstructed and rotated, they had to try to figure out how to insert the internal fixator without bumping into the work done on the knee.

The surgery was a success, but due to the knee reconstruction he had to postpone lengthening for a month to wait on the knee to heal and regain motion. Graham ended up in the pediatric intensive care unit for several days due to issues with blood, oxygen, and trying to regulate medications. After three nights in the pediatric intensive care unit and one on the regular floor, he was finally discharged. He then started his long journey with physical therapy. 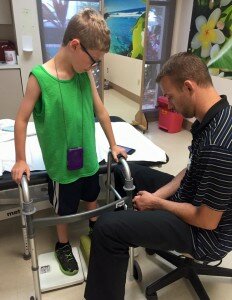 After a month of lots of pain, tears, and hard work, he regained motion in the knee and was strong enough to face another surgery. This surgery would start the internal device and we began lengthening. The surgery was a success. We used the machine to lengthen Graham’s leg around 200 times last summer and we were able to grow his femur bone 5 cm. During the initial surgery the doctors were able to gain 2.5 cm of length with the knee reconstruction.

After three and a half long months, we finally reached our exit appointment at the clinic with roughly 7.5 cm gained. Then the doctor said, “I sorry, but you are going to have to have another surgery. The following week they did an outpatient surgery to insert a plate as a preventive measure to keep the tibia from bowing out like the femur had done. Once again, Graham made it through just fine and the following week we returned home to Covington.

Since being home Graham has continued with physical therapy and pushed right along. He was able to ride the Fuzz Run in his wheelchair with the assistance of some amazing Covington Police Detectives. He was also able to walk across the finish line on crutches. Such a huge accomplishment for him after all he had been through last summer.

Since the Fuzz Run, Graham continues to improve. He is now walking with only the assistance of his shoe lift. I am not saying this journey has been easy, because it hasn’t been. But we sure have been blessed by God, the medical team, our friends and family, and the Covington community. We can’t say thank you enough.

Graham’s journey is not done. His medical plan continues and that’s why the donation from the Fuzz Run means so much to us. It will help Graham continue to reach his goal of one day (as an adult) to continue walking and to have two flat feet on the ground. It is estimated that he will have to return to Florida to the Paley Institute to lengthen his leg at least two more times before he reaches his final adult height.

Today, the words Thank You just don’t seem like enough. Thank you, Covington Police Department and the Police Who Care for all you do for the citizens of Covington. Thank you for reaching out to us as a family in need and for all the others you help daily. Thank you Fuzz Run sponsors. The event couldn’t have happened without you believing in and supporting our community.

The Fuzz Run has always been a wonderful event that unites our community. We are more than blessed to call Covington our home. Please accept our sincere thanks and love. Thank you all for walking with Graham. May God continue to bless us all!

One Response to “Graham’s Precious Gift”