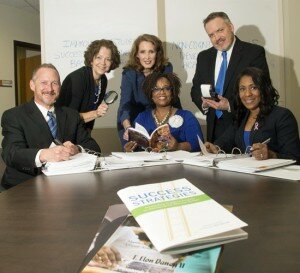 The grant is part of the DOE’s Predominantly Black Institutions (PBI) Program and will be used to increase the number of students who exit remedial math in two or fewer semesters through the use of academic success coaches.

“Words cannot express how excited I am about the granting of this prestigious, highly competitive grant award,” says Dr. Katrina Hunter, director of another PBI grant-funded program called Project R.A.I.S.E. Hunter also served on the team responsible for securing the new award and will serve as executive director of both PBI grants moving forward.

R.A.I.S.E. stands for Raising Achievement and Increasing Success in Education, and its accomplishments in student retention and graduation are a big reason GPC received the recent grant, according to Dr. Margaret Ehrlich, Dean of Mathematics, Computer Science and Engineering at GPC.

“This is an opportunity to take the best practices used with Project R.A.I.S.E. and expand them so that we can raise retention and graduation rates for an even greater number of students,” Ehrlich says.

The chief goal of the multi-million dollar grant is to close the achievement gap between non-African American and African American students. The program utilizes evidence-based strategies—providing students with academic-success coaching that focuses on strengthening non-cognitive skills, such as note taking, time management and work-life balance.

“So often, it’s these types of things that keep people from being successful college students,” says Glenn Pfeifer, director of Grants and Sponsored Programs at GPC. “The more resources we have to help students, the better.”

In addition, the project will recruit students from GPC’s teacher education program to serve as peer academic coaches. Pfeifer says this will give the education majors an opportunity to explore the relationship between students’ non-cognitive attributes and their academic outcomes.

“They will learn how the practice of academic coaching differs from teaching and how it can be used as a tool to help students deepen learning and improve their effectiveness.” Hunter says.

The academic coaches also will facilitate monthly workshops, panel discussions and other activities that increase student engagement and provide the opportunity to discuss non-cognitive skills and share various ideas with peers.

Ehrlich credits a great deal of collaboration among Georgia Perimeter’s grants office, math faculty and the Project R.A.I.S.E. team as the reason the college received the $3 million grant.

“We couldn’t have made it without their contributions and support,” says Ehrlich.

The five-year program will impact all students in learning support mathematics at GPC and expects to increase the percentage of black students exiting math in two semesters to 55 percent—matching the rate of success for non-black students.

No Responses to “GPC Awarded $3 Million Grant, Largest In Its History”