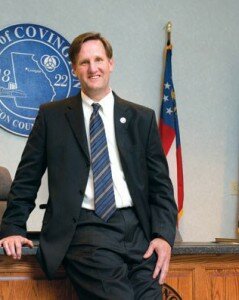 COVINGTON, Ga. (August 27, 2015) – Covington, Ga. mayor Ronnie Johnston announced today he will officially seek election for a second term in office.  Johnston, who took office in 2012, pointed out numerous positives accomplished during his tenure, but said it was the items he has yet to cross off his agenda that drove him to run for another term.

“This community has accomplished an awful lot the last four years,” Johnston said. “We have rejuvenated the downtown area, have approval for the Hwy. 278 corridor revitalization project, more than 1,000 new jobs have come to Covington and we have fostered a new sense of community through events like Christmas on the Square and Independence on the Square. On top of all that, we lowered taxes the last two years.

“All of those are great and we have made tremendous strides, but I don’t feel like my job is done. I want to lead this community to places a lot of people have only dreamed about.”

When asked what items have yet to be checked off his to-do list, Johnston pointed out one key area he feels will greatly impact the others. “Under the right leadership, Covington has the opportunity to be the number one place to live, work and play in the state of Georgia. We have an incredibly solid foundation, but we need to keep building and laying bricks,” Johnston said. “It starts with bringing commerce to Covington, both large and small. From there other things tend to fall in place. When people have jobs they have money to spend here in our community, making it stronger. It’s cyclical, but it all starts with bringing new business to Covington.

“I want to move the people and the city of Covington forward. Not just one group of people, but all of our citizens. It takes effort from everyone to do this. For example, all of our citizens old and young should be able to read and write.”

Johnston, a Georgia native, called Covington his second childhood home growing up. “As a kid, we would spend time at my parent’s house on Jackson Lake and I have the best memories of this area growing up,” Johnston said. “Covington was an integral part of my childhood and I am honored to have had the privilege of working for the people here since 2012. I hope to be able to continue serving them into the future.”

All candidates must announce their intention to seek public office between August 31 and Sept 4, 2015. Anyone wishing to vote in the election must be registered by October 5, 2015. Advance voting will be held October 12 to Oct. 30, 2015 with the general election on November 3, 2015 at City Hall.