Country Ham or City Ham? And The Winner is….. 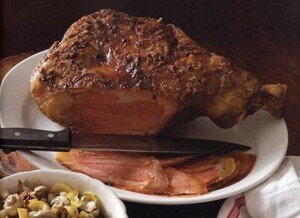 A couple of years ago I wrote an article on how to prepare a Country Ham for eating during the Holidays. This month’s column continues with some of the culture and the reason we LOVE our Country Ham here in the South.

Country Ham…City Ham? “I have never heard of City Ham” you may be saying….WELL if you ask that question you may not have grown up in the Promise Land we call the “Land of Cotton, Look Away, Look Away, Dixieland.” LONG before there was refrigeration, or ice, OR Honey Baked Ham stores, the folks in the country (that is the folks who did not live in the city) would “cure” a ham with salt and let it hang in a Smoke House for months and sometimes years before eating it. I was reminded of this age old tradition while reading an article in one of the hometown papers in Kentucky a few weeks back. The writer, Sharon Thompson, grew up in my home town and her mention of the dairy her dad worked for brought back many old childhood memories. I started thinking of the many friends of my Dad’s who cured Country Hams.

Now the process for curing an Old Ham, or Country Ham, is pretty simple. You basically take a “green” ham, rub it in salt and put in a smokehouse for a time. After removing from the smoke house you then let them cure for several months or even up to 2 years. The longer they cured the tastier they were. I am sure that if you “GOOGLED” Country Ham you could get all the information needed to start the process.

The memories I have are of going into the Richardson Brothers warehouse, or the Thornberry’s warehouse, and smelling that great aroma. As soon as you opened the doors of the warehouse the fragrance of those hams would fill your senses. I think the main process of the curing process is hanging the hams in a warehouse that the temperature will raise near 100 degrees during the summer. There is something about that smell hanging in the air as you open the warehouse doors that makes “your mouth go to watering.”

Another reason for Sharon’s article was to reveal something we all have known for years! IF we Southerner’s think something is a good thing, then the Yankees will eventually want it to, and thus it was written. Apparently some of the “Finer” restaurants, “UP THERE” now have recognized what we have known for generations, there ain’t nothing like a good piece of salt cured Country Ham!!! Don’t let anyone try to sell you a SUGAR cured Country Ham….they are just trying to “citify” an OLD Ham and it will not work…Salt is the magic ingredient. You can’t dress up a Mule to look like a Princess!!!!

Now where do I get one of these great hams you may ask….. In this area it does not look like there are any local meat houses who smoke and cure their own hams, which is a shame. It would be a great field trip for some school kids to see how the early settlers prepared their meats. I do believe that Holifields’ in Covington used to cure their own, but they had a fire years ago and they now carry a ham from Virginia, of which I have bought many times. Good hams. Another great choice is Clifty Farms Country Hams which is promoted by another great Kentuckian…Loretta Lynn. Now you can’t go wrong buying a product from a girl who grew up in Butcher Holler KY. It just wouldn’t be Southern……OR Country.

No Responses to “Country Ham or City Ham? And The Winner is…..”