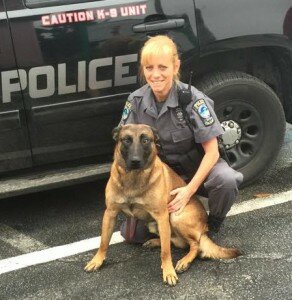 Without any information as to where the missing woman may have exited or what direction she may have gone, K9 Eddie started his track cold.  Immediately picking up on a track, he led his handler directly to two other Conyers officers engaged in the search.  Not the intended target, Officer Scruggs had Eddie start over back at the facility.  Searching around the property, Eddie stopped abruptly and turned his head to listen before dragging his handler into the wood line where Officer Scruggs then heard a quiet moaning.  Eddie was released and ran straight to the 83 year old woman and began to bark.  She was on the ground, soaking wet, unable to get up and was very confused.

“Thank goodness for K9 hearing because I would not have ever heard her,” Officer Scruggs explains.  “The coolest thing about Eddie is once I put his tracking harness on, he knows what we are about to do.  No commands need to be given.”

Eddie is a three year old Belgian Malinois who joined the Conyers Police force one year ago this month.  His official job description is Narcotic Detection and Tracking.  K9 Eddie’s tracking efforts are specifically used for lost children, Alzheimer’s patients and anyone “at risk”.  Due to Eddie’s personable disposition, this type of tracking was later added in to his extensive training.

“Thank you Officer Blanchette and Officer Ferrell for running the tracks with me.  Keeping up with Eddie is not an easy job,” Officer Scruggs commented. “The entire squad worked diligently to try to find her.  I’m just glad it ended well.”