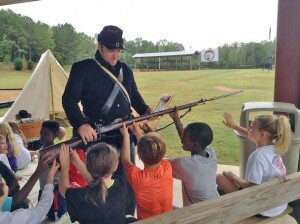 Reenactor Rob Pippins showing the Rifle to the 4th graders.

Conyers, GA –  4th graders stepped back in time on Sept.28th as they were visited by Mr. Rob Pippins who demonstrated what it was like to live during Civil War times for both the Union and the Confederate soldiers. He brought with him several Civil War artifacts and explained what each item was used for during this time period. Rob Pippins is the father of Luke Pippins, a Young Americans 4th grader. Reenactor Pippins dressed in period clothing while describing to the students what each article of clothing was used for and how it was made.