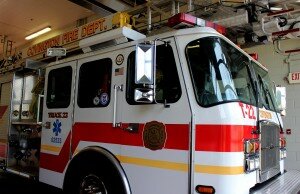 COVINGTON, Ga  – Founded in 1909, the Covington Fire Department has operated from several locations close to The Square. A lot has changed over the years, but the first Fire Station in the City of Covington remained Station Number One. A second station, on Alcovy Road was added in October of 2006 and was called Station Number Two.

During this time, Newton County was building fire stations as well and numbering them sequentially. This created two Stations designated with the number One. Through an automatic aid agreement, if there is a fire in the City in Covington, the County Fire Department will automatically send a fire truck and a Battalion Chief. If there is a fire in Newton County and outside the City limits, the City of Covington will send a Battalion Chief and if requested, a fire truck.

The likelihood of Newton County or the City sending their Engine One to assist is very high, so at the scene of a fire, there would be a high probability of having two trucks with the designation of Engine One. In a situation where clear communication on-scene and from the emergency dispatcher is critical, dual truck designations could be deadly.

“Every time a firefighter goes into a fire, he is literally in the fight of his life,” said Covington Fire Chief Stoney Bowles. “We place so much emphasis on making sure we have the correct training, the best equipment and the finest gear, but something intangible like a number could cause disaster when communicating in a life or death situation.

“That is why it was logical to renumber our stations to avoid any confusion when the Newton County Fire Department and the City of Covington Fire Departments respond to the same scene.”

As of September 1, 2015 City of Covington Fire Department Station Number One officially became Station 21 and the Alcovy Station became Station 22. Along with this alteration, the City’s fire trucks were renumbered as well. Including Volunteer Stations, there are eleven Newton County Fire Stations and the stations as well as the County’s trucks will keep their original designations.

“Firefighters love tradition and we avoid changing it at all costs,” Bowles said. “But when it is a matter of safety, there is no reason not to make advancements.”