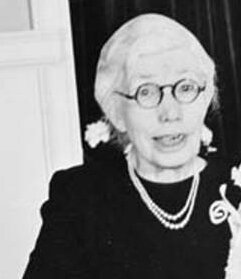 A year or so ago I wrote about a Christmas I vividly recall. Although I vividly recall a number of them, I am sorry to admit that it is because of some cherished toy or article I received. The Christmas to which I refer here was probably 1939. I know I was very small. We lived at the comer of Green Street and Scott Street, in the house sometimes referred to as “Seven Gables”- which it has. Mary Emma Fitzgerald, a long time librarian in Conyers, lived in the house on the other corner, where Marty and Charlotte Jones currently reside. As a tyke, I loved visiting with Mrs. Fitzgerald. She had an elderly aunt, Miss Mary Culler White, who lived with the Fitzgeralds for a period of time. Miss White had retired from serving in China as a Missionary in the Methodist ForeignMission Field.

Miss White was a bit scary to me. She was thin and frail looking. She had snow white hair, which seemed especially appropriate to me, considering her name. She had a complexion almost as white as her hair. She wore horn rim glasses. Her voice was high pitched and she spoke funny; in a Chinese sounding sing-song voice. The ambience of the home was remarkable. There were objects from China. I recall articles whittled from exotic woods, including sandalwood – a kangaroo which balanced on the tip of its tail, a Chinese coolie which balanced with a load on his shoulders, a long carved back scratcher, and others. The wonderful fragrance of sandalwood permeated the house. I was convinced that she had been in China so long that she looked and spoke like an ancient Chinese woman.

That Christmas Miss White gave me a small mesh stocking filled with candy. I had never received such a thing before, and I shamelessly took it secretly to our barn loft where I  ate the entire lot of candy at one sitting, without sharing with my brother or sister.

My point of recall here is not the candy or other toys I may have received that year, but of the person. Little did I know that Mary Culler White was a very significant missionary.  Not only did she live many of her years in China in a houseboat, but was very effective in her ministry. In fact, she was one of the earliest messengers of the Christian Gospel to Korea as well, and is highly credited for her influence there. An author of several books  as well, she was a person of great accomplishment and great renown at the time, and I didn’t know it. Sadly, as concerns notoriety, she couldn’t make it today. Not being an entertainer, or ball player, and certainly not a politician she couldn’t even get a nod on the evening news.  I feel privileged to have known her, even as a little guy. It made a great Christmas for me. I can still smell that sandalwood, taste that candy and remember Mary Culler White. I don’t think they make them like her anymore.

One Response to “A Christmas Remembered”