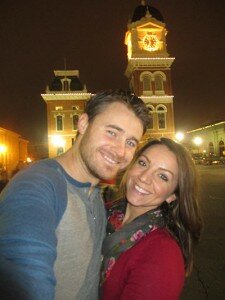 Covington, GA – If you travel West on Interstate 20 from Covington for 2,174 miles you will end up in San Diego, Ca. If you travelled the speed limit and theoretically never stopped for fuel or to sleep it would take approximately 30 hours. You would have not taken a turn and travelled in eight states when you arrived in ‘The Saint and the City’ (or San Diego as we call it). When you set foot in the California sand, it is probably safe to say you would be a little bit out of your comfort zone.

That didn’t stop one Covington couple from not only making the trek from San Diego to Covington, but eventually calling Covington home. The story of how Matt and Rachelle Reimers ended up in Covington is about as long as the car ride from San Diego and not nearly as direct. Matt grew up near Omaha, Nebraska and Rachelle in San Francisco. A collegiate baseball player, Matt played for a year in Nebraska before moving to California to continue his education and baseball career.

Through mutual friends, he met Rachelle and after a two year courtship the two wed in California. The logical question being asked now is how the couple ended up in Covington. The 30-year-old Reimers and another couple decided to take a trip to New Orleans and along the way everyone got to choose one thing they wanted to see.

“I chose an air boat ride in a swamp in Louisiana,” Matt said. “I wanted to see an alligator. There aren’t any alligators in California, or Nebraska for that matter.”

Rachelle wanted to see a town with Southern charm that had a town square and after a little Internet searching, Covington came up.

“We detoured from the Atlanta Airport to Covington before we headed to New Orleans and I fell in love with Covington as soon as we got here,” Rachelle remembered. “The antebellum homes and town square were like something you would see in a movie. It was just gorgeous.”

While Covington was a dot on the map for big-city Rachelle, it seemed large to Matt, who had 800 people in his hometown in Nebraska.

“I saw tall buildings and lots of restaurants compared to my hometown, so I thought it was actually pretty large upon our arrival.”

A year after their initial trip, the Reimers’ decided to pack up and try ‘small town’ living.’ The first step was getting their employers to agree to the move. Matt is a business analyst in the insurance industry and Rachelle does marketing and communications for a scuba diving trade association.

“Our employers were very supportive of our adventure,” Rachelle said. “Both of our companies agreed to a work from home environment and it is working out really well.”

With just eight months of residency in Covington under their belt, both Matt and Rachelle appreciate not only the change of pace Covington offers in terms of daily routines and their lifestyle, but also the difference in personalities of people in the South versus those on the West Coast.

“People here are so genuine,” Rachelle said. “I have seen how loyal people are to each other here and how willing they are to help others. It is a stereotype that people in the South are friendlier than other parts of the country, but it is true.”

Matt is an avid outdoorsman and appreciates the beauty of Covington and all of the outdoor activities it has to offer. A recent kayak trip down the Yellow River reinforced the difference between San Diego and Covington in terms of terrain.

As you might expect, the cost of living is substantially higher in San Diego so the Reimers’ were pleasantly surprised when they started their housing search. They quickly found a house to rent that was much larger than their 625 square foot apartment in San Diego and more reasonably priced.

Rachelle said her ‘welcome to Covington’ moment was seeing a deer head on the wall in the sporting goods section of the Covington Wal-Mart.

“I couldn’t believe it was on the wall in Wal-Mart,” she said of the taxidermy. “I posted a picture of it to Instagram that said ‘We’re not in San Diego anymore.’”

Another thing the Reimers’ didn’t anticipate were such drastic changes in temperatures throughout the year. The average high is San Diego is 76 degrees while the average low is in the 50s and just 10 inches of rainfall are recorded each year compared to the U.S. average of 37 inches.

“Those things you all call seasons? We don’t have those in San Diego,” Rachelle said. That was sort of a shock and it’s not even August yet,” she said.

When asked what some things from the Golden State they missed were, Rachelle didn’t hesitate.

“Legit Mexican food, without a doubt,” She said. “It is so fresh and different out there. It’s just unbelievable.”

When asked what he missed, Matt had a response anyone from the South will appreciate.

“There are no mosquitos in San Diego,” Matt said. “Those are going to be the death of me.”