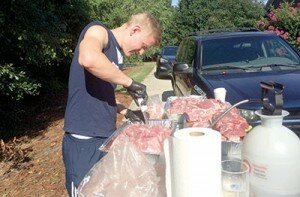 Did you know that one of the hottest Bar-B-Q joints in the country these days is in New York City…..NEW YORK CITY! What the Hey! I know, New York City had gotten a bad rap years ago from the Pace Picante Sauce Folks, but from what I hear this New York City Bar-B-Q joint is the real deal. Now it isn’t bad enough that one of our great southern traditions has high-tailed it across the Mason Dixon Line. I hear tell you can now find ribs in Europe. In fact, they are serving those baby’s (and spares) in Germany. What is next, pizza?

I found this little tidbit out not by traveling via Delta to the land of Oktoberfest, but by traveling via my Nissan to Henry County, Georgia right down along Lake Dow way! I recently had the honor of smoking some pork and ribs along with a few other sides for a big going away party for Kyle Wetzel, who was headed back to his US Army post in Germany. Kyle is the son of a good friend and she asked me to help out preparing the food for the event. NOW because Kyle was headed back to Germany, that doesn’t mean you should think that is how I found out about ribs in Germany. That as they say is, “The rest of the story!” (Sorry, Paul Harvey)

As the guest list grew, my “Big Green” cooking space got smaller. So I needed to call in reinforcements. I decided to call on my good friend (if you are counting that makes two good friends I have mentioned so far in this article.) Wells Wheeler is a local State Farm Agent in McDonough (send the check to my home address Wells.) Wells is a competition Bar-B-Q man and he had the machine to help me out. After talking to Wells, he realized he was smoking some pork on the very same day and he invite me to throw my pork on along with his (whew ….off the hook!)

Upon arrival I noticed a young man out at the side of the house trimming the pork butts that Wells was about to prepare. I was not sure if Wells had a son his age so I introduced myself and noticed an unusual accent. Wells introduced me to his German Exchange Student, Simon Herrmans. It seems that Simon is part of the Georgia Rotary Student Exchange Program, or GRSP for short. 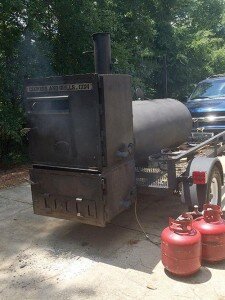 As a fellow Rotarian, I am very familiar with the program since our club here in Conyers had just welcomed our student, Julia Alvaer, who is from Norway. Before the day was out I also met another student from Estonia, George Astok. George and his host family also stopped by to see what was going on in that big smoker.

Both young men had never been around the actual process of smoking the pork, etc. so we had a great afternoon “teaching them the ropes” OR should I say Wells did the teaching, I did the beer drinking and slopping of sauce. Simon had eaten ribs and all but was not familiar with the way we do things here in the South so he had a very, if not important, learning experience less than two days on Georgia soil. You can’t learn everything from a book or the internet!

The best part of the day, as it usually is when sitting around for hours smoking meat, is the camaraderie among the group doing the cooking. With this particular group, a Kentucky Redneck as Wells called me, a “Gawga Bulldawg”, and a 22 year old young man from Germany, the conversation was lively all day. We both enjoyed filling Simon in on the culture of this area and what he can expect over the next 10 months as our guest in this country. We learned a little from him as well so it was a great afternoon for all. You are never too old to learn as they say.

To recap the day, the Saturday night party was a success, the afternoon of smoking the meat was a success, and spreading the word about the SOUTH to an unfamiliar soul was a success. Well, I think we got him off to a great start. Not only did we teach him the fine art of smoking pork in the South but we made a new friend as well. Thank you, Wells, for allowing me that opportunity. It was a memorable day!

One Response to “Bar-B-Q Has Gone International”