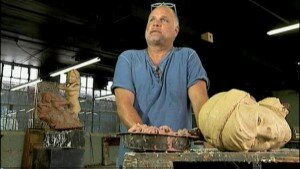 I am not much of a writer, and I have a feeling this will be long, but bear with me…..

The world lost a great artistic talent today, far too soon, and many of us lost a dear friend. A man who had the biggest heart of anyone I’ve ever met, Andy Davis.

I saw this picture yesterday in one of the many news stories and it struck me. I think it might have been first posted for the article the AJC did last year, but not sure. The thing is, to everyone else who saw it, it was just an artist at his workbench working his magic. The beginnings of a bust of an unknown subject.

To me, it was much more. You see I first met Andy, several years ago, at an evening party on St. Simons through some mutual friends. He was wearing his captains hat, and to me, he looked amazingly like Quint, from Jaws. We quickly struck up a conversation, and talked about the fact that he was a sculptor. I thought, oh yeah, a sculptor, sure… But to my amazement, I quickly discovered he was an amazing sculptor. He had done some incredible works, Ray Charles in Albany, Hugh Heffner, memorials in Atlanta, just to name a few. As we talked that night, and I got to know him, the discussion somehow came to my son, who I had lost to an accident a little over a year earlier. I recall tears being shed, and Andy giving me a big hug.

About three months later, out of the blue, Andy came to me, and said that the story of my son touched him, and he wanted to do something special for me. He wanted to sculpt a bust of my son for me. He was excited and told me that it would help me heal, and come to terms with the tragedy. I was shocked, and honored. First that he even remembered that conversation over drinks several months prior, on the first day we ever met, but even more that it had touched him enough to do something like that for me.

Art takes time, and Andy had many other professional, paying obligations that he had to do. He would often apologize that he hadn’t finished the bust yet, and assured me he was working on it. I always told him I had no doubt he would finish it, and that I felt that this was something that shouldn’t be rushed, to take as much time as he needed.

Well, the summer St. Simons gathering has continued these past few years, and has become my favorite tradition. Every year more great memories, laughing with friends. Some of my family even got to meet Andy last year when Heather and I got married. Andy was the hit of the party, as jovial as ever, instantly hitting it off with everyone there, half of whom he’d never met.

Fast forward to this year, just a few short weeks ago. There was a scheduling issue with the house Andy and others were scheduled to rent. We opened our house to all of them for the first two days of vacation, until they could get into their new rental. I think we had a total of around a dozen people in a three bedroom house, it was nuts! We stayed up a little too late, drinking a little bit too much, rotating through everyone’s favorite music until late into the morning hours. So late in fact, that one night, I fell asleep on the porch after everyone else had gone to bed. Andy, ever the concerned friend, woke Heather at least three times to ask “do you think Larry’s all right? Should I go get him?” Eventually he rescued me from the wilds of the covered patio and I went to bed. We all got a great laugh out of it the next day.

A few days later, Andy called me aside at their rental house. We went out back in the light rain, and he gave me the bust of my son, Kyle. He told me, as he had told me about many other works he had done, that they had spent many late nights, Kyle and he, talking in the studio. He said they had great conversations, and he was really getting to know him. He told me he was sure he was a great kid.

Well, back to the picture that to all but me, was just an artist at his trade. You see, the beginnings of the bust in the picture, well, that was my son Kyle. It turned out to be the last work he ever finished, and I will forever treasure it. The added bonus now is that not only will it help deal with the tragedy of losing my son, but also in the tragedy of losing a great friend.

Sure, he was an amazing artist, but I will forever remember him as a great friend, and a loving soul. Someone who always brought a smile to everyone around him. St. Simons will never be the same without you my dear friend. RIP, and give my boy a great big hug from me, and tell him I’ll see you both again one day.

Please pray for his family, and all his many friends.

No Responses to “About Andy Davis, from friend Larry Hillcock”